Again, the main Macroeconomic Themes are FED rate increases, halting of Bond buying, and the threat of war in Eastern Europe.

There are rumours of Fed increasing its fed funds rate before their next meeting in Mid-March. This is in response to the higher-than-expected Jan CPI numbers.

The sabre rattling between Europe – Russia – USA, may just be that. Global uncertainty can influence markets but usually they tend to shrug local skirmishes off. However, in an environment of no fiscal and monetary support, Geopolitical issues can cause selloffs.

The technical analysis issues are – recent rallies have failed, and prices are below the important moving averages. I include some scary tech analysis below.

CPI in the US continues higher.

Bullard talked about having Fed Funds Rate at 1% by July and was generally hawkish, talking about reducing the size of the balance sheet. FED speakers can be biased – dovish or hawkish, however they tend to speak from the same script. The idea is that they give market participants an insight into their thinking before they adjust monetary policy. Market does not like surprises.

“I’ve been wondering why positioning is still bullish.

Then I realized: maybe the Fed has already LOST its credibility.

Investors are long for the Fed capitulation.

Well, I have news for you.

So, the Fed HAS to tighten.

Yields on the 10 year rallied above 2% mid-week but reversed on their safe haven characteristics in front of the Geopolitical news and lower stocks.

All assets/risk are valued in relation to Bond yields imho therefore risk assets must fall in price.

Gold rallied and broke out of its range. Gold is a hedge against Inflation and the safest of safe havens.

I do not see it going to the moon in the face of higher interest rates.

Economic news due –Monday is Presidents Day (Washington’s bday). It is a Federal holiday. Cash markets will be closed, futures open as ever!!!

History does not always repeat itself…..

$SPX failed closing above its 20 week MA for the 2nd week in a row and closed the week with a bearish engulfing candle. The next potential week for a weekly cycle low is the 1st week of March. If it breaks below 4223 the target is in the 4057-4164 range (May-June 2021 lows).

Many would call that a bear flag. Price is still in the channel though so I wouldn’t bank on it playing out.

The divergence on the stochastic is interesting also. 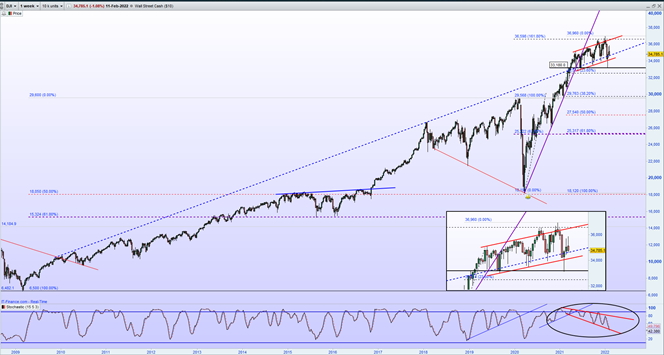 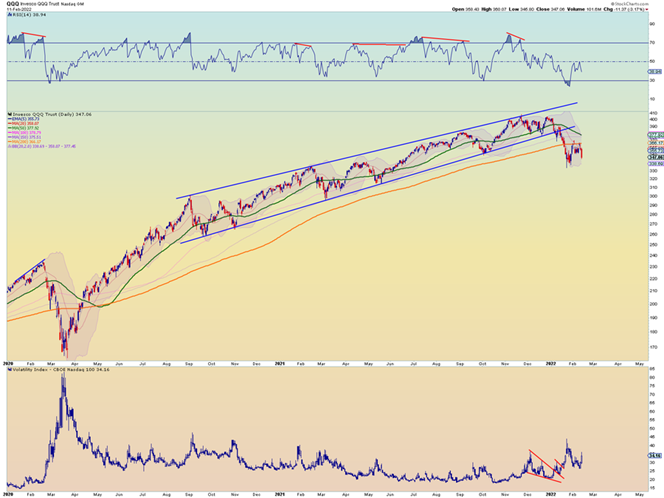 Probably not a great indicator but

“For all the volume enthusiasts out there. Let’s set the record straight. Volume goes UP during declines. Fear of losing is more powerful than FOMO.

Headline heavy week (& more ahead) but 0 coincidence where #ES_F closed: At its core trendline from Jan low. Decision Time

Head and Shoulders pattern – not healthy 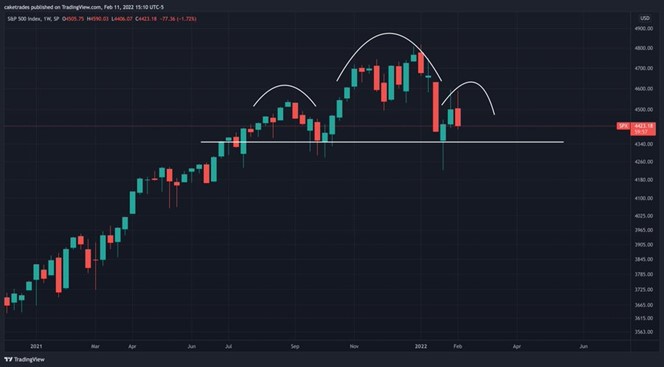 It is a short term game. I am flat and only playing when Time and Price Action show momentum. Join the tide!!!

Watch your risk, join momentum moves……Call or email for discussion.