I did mention during last week that I was itching to sell!!!

Seasonality as said before is strong and today’s bounce confirms.

Fed meeting in May is out of sight of short-termists. Markets need to be punched in the nose before waking up and smelling the coffee. Ugg two clichés in a row, sorry about that!!!

Good employment numbers on Friday give a fair impression of the US economy.

Stocks did not like the good news—–no fed punch bowl.

Other indicators are pointing towards recession but again we won’t know we are are in one until we are.

In our Investing course commencing this Thursday (avail of last minute, regulars discount), we point out takeover targets as good investments.

Tuesday sees the ISM non-manufacturing indices at 3 pm. 70% of the US economy is assessed in this comprehensive economic release. Could bad news be good news and weak PMIs lead market to believe FED won’t act??? Unlikely. A bad set of numbers will point to recession and stocks do not like that.

Quiet on this front, at last. Though some are slated to speak this week.

Covid could wreck their economy if they keep closing down. Hard to be sure what is going on there.

Are considered the most important part of the financial markets!!! 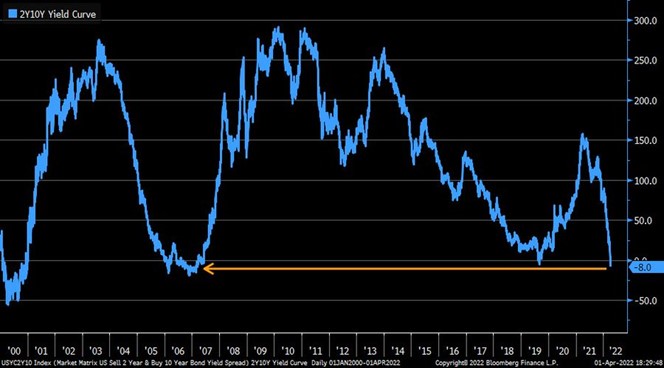 “Showing my age I know, but I have been involved in financial markets since the mid 1980s and have seen 4 US 2/10 curve inversions over that period all of which preceded US recessions. If we widened out sample to mid 1960s it’s 8 for 8. The US 2/10 curve closed at -8bps on Friday.”

HOWEVER, IT USUALLY TAKES 6 MONTHS MIN FOR RECESSIONS TO SHOW UP. THE STOCK MARKET IS NOT LOOKING FORWARD PRESENTLY.

I would not interpret the currently very flat yield curve as indicating a significant economic slowdown to come.” (and subprime is contained.)—Ben Bernanke, March 200

As mentioned, many times, the further in time we move from a major incident the less effect it has on markets.

Im looking higher in #ES_F 1st, but when we do get bear market, the nature of downtrends (characterized by violent short squeezes) means most “bears” will struggle to profit 2008s bear saw 9+ rallies over 8% (some > 20% lasting weeks). Bull or bear *must* trade 1 leg at a time

With earnings season on the horizon –  Companies trading at rich valuations need to and are expected to blow away street expectations.

AND finally for our Gold bugs, particularly Neil!!!

Bull better enjoy this run as seasonality no bueno, from May on………..sell in May and go Away!!

Yours tired from celebrating my 68th bday in Palma de Majorca!!!!